Separating your Leads and Deals is vital to keeping all of your data organized. Below we explain what each is, so you can understand whether to add your clients as a Lead or a Deal.

In the early stages of your lead generation process, you may find yourself with a lot of potential deals sitting in the early stages of your pipeline, not ready to move forward through the sales process but also not cold enough to be lost or deleted. This can cause a lot of clutter in your workspace and can distract you from focusing on the deals that need your immediate attention.

In Pipedrive, you can add leads to your account before adding them to your pipeline as Deals. Our Leads inbox is a separate inbox to keep your prequalified Leads in before they become deals. Once you decide which Leads can be qualified, you can easily convert them to deals and add them directly into your pipeline to start your sales process.

In Pipedrive, the ongoing transaction you are pursuing with a Person or Organization is tracked as a deal, which is processed through the stages of your pipeline until it is either WON or LOST.

To better understand how this relationship between your contacts and deals, we suggest reading about how Pipedrive data is organized, which can be found here.

When clicking on a deal, you will be taken to that deal's Detail View, which displays all of the relevant contact information, as well as all activities, emails, notes, and actions in regards to the deal.

When you've qualified the Lead and are ready to pursue it as a deal in your pipeline, you can click Convert to deal. This will bring you to a new dialog, where you can define the pipeline, visibility, and value of your new deal. 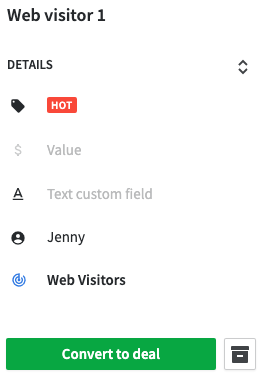 Any person and organization information from the Lead will automatically be populated in the Convert to deal dialog, so you can easily add them to your contacts lists. If Pipedrive recognizes a potential duplicate contact, you will be prompted to review and select an existing contact if applicable.

Any notes added to Leads will also be transferred over to the deal detail view. 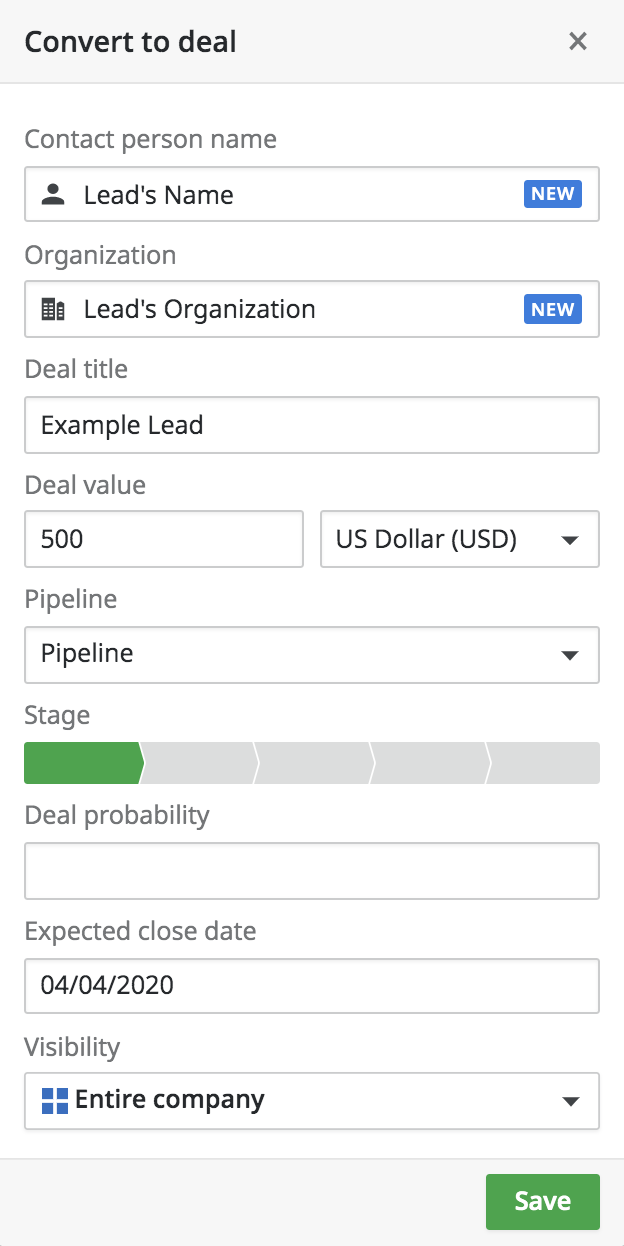 Once completed, hit Save to convert the Lead into a new deal. The Lead will be removed from your Leads inbox and moved into the Pipeline specified.