The Insights Deal Progress report will give you the ability to see the deal advancement through stages in the time frame specified, so you can see how well your deals have been progressing through your sales cycle.

To create a Deal Progress report, go to the Progress tab > Insights, click the plus '+' sign beside Reports, and choose Deal > Progress.

The progress report will default to the following filters:

You can always adjust or add filters according to the data you want to see. The Date of entering stage condition will be locked in since it is the default field needed to assess deal progress.

How is deal progress measured?

Note: Winning a deal will not affect deal progress report results in the stages that were skipped.

If you choose to measure by Number of deals, you will see the number of deals that have entered each stage in the timeframe selected. Other deal progress measures such as deal value and deal weighted value can also be selected. Hovering over each column will show the breakdown of the field you have chosen to segment by.

The entered stage deal count will also include deals that have skipped that stage while moving on to a future stage. For example, if one deal has moved from stage two directly to stage five in the time frame selected, it will show as having entered stages three, four, and five.

Insights reporting offers a lot of flexibility in customizing your reports to reflect the data you want to see. The progress report will always show you the stage entered field since it's important to know where your deals advance to, but you can group how you want to view this data in a number of ways.

You can choose the field you want to measure your deals by on the left-hand side of the chart. 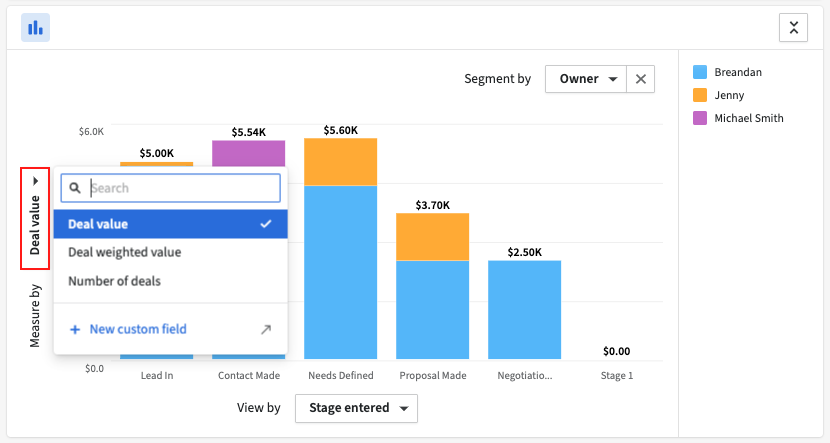 The View by tab will allow you to group your data by a specific field in your Pipedrive account. You can group by various default Pipedrive fields as well as any custom fields of the following types: 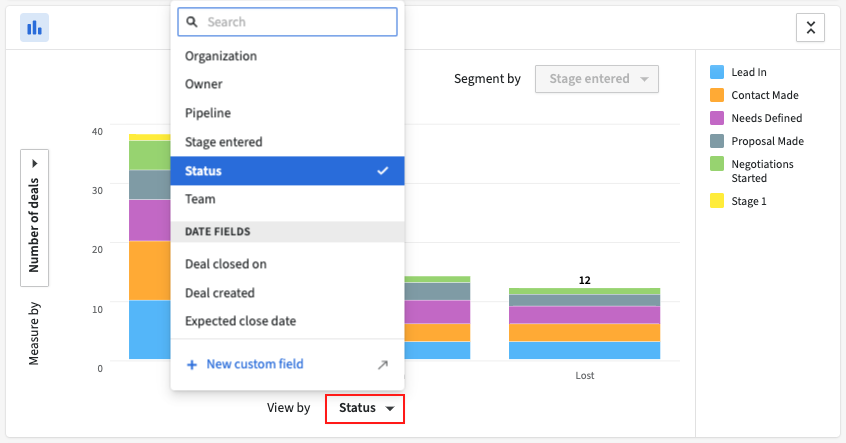 If you choose to view by anything other than deal stage, the segment by filter will be locked into Stage entered, to show the breakdown by stage.

The segment by option will allow you to further section your data within columns. You can group by various default Pipedrive fields as well as any custom fields of the following types:

Once you've finished creating your activity report, you can add it to your dashboard or share it with your team.